Coming closer to 5 year anniversary with Remicade.  Now it's just "routine" for me every six weeks.  Go in the the infusion clinic, weigh in, temperature taken, blood pressure taken, wrap my hand in a warming blanket set to high, to make the veins in my hand "pop", get hooked up to the juice and an hour later, I'm done.

Since January my blood pressure has been high.  Not normal for me.  I've never had a blood pressure problem.....ever.  But it fluctuates throughout the infusion.  Today was 152/103 to start, then down to 148/99, then up to 153/100 and at the end 163/109!!  What the hell!  The nurse sent notes with my past 6 months vitals to the Gastro to see if she has an opinion.
Not looking forward to the answer.  I have enough problems, thanks.
No comments:
Email ThisBlogThis!Share to TwitterShare to FacebookShare to Pinterest
Labels: Crohns, Crohns and medication 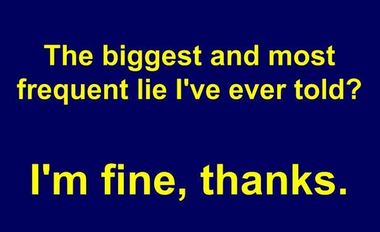 If you can do a complete wardrobe change while sitting on the toilet...
you might be a Crohnie
.
No comments:
Email ThisBlogThis!Share to TwitterShare to FacebookShare to Pinterest
Labels: Crohns, Crohns and humor, You Might Be A Crohnie

I have everything from this blog but also other information too!!
Come take a look and follow me on Facebook!!
No comments:
Email ThisBlogThis!Share to TwitterShare to FacebookShare to Pinterest
Labels: Crohns

Last week, my wife and I were trying to figure out what to do for the first week of spring break with the kids.  First we thought maybe head up to Edmonton, Alberta to visit family and they could see the West Edmonton Mall....but after talking with my cousins, the weather would still probably be snowing and the thought of driving through the Rockies in the snow, just wasn't that appealing to me.  Next we thought we'll head to London, Ontario, again to visit with family.  But alas no..for the same reason, snow.  Good thing too, big snow storm going through there right now.  We finally decided on staying within the province and head over to Vancouver Island and Victoria to see her family and take the kids to the "touristy" places like the Royal BC Museum, Craigdarroch Castle, The Bug Museum and Miniature World.

We all should have left on the ferry this morning but only my wife and kids were on it and I am home laying on the couch typing this post.  Crohn's did it to me again.
About 4 days ago my peri anal abscess decided to come by for a visit.  I was hoping it would have calmed by the time we would have to leave but here I am.  It got worse each day and then finally started to drain...I was hopeful.  But it was just toying with me.  I stopped eating and switched to liquids in a desperate attempt to calm my intestines down enough to relax the abscess.  To no avail.  But, it hasn't got worse.  Nor has it got better.
Yes, I could have taken the chance and gone but if it got worse, it wouldn't be fair to my wife and kids if I was laid up in the hotel room.  It's difficult to walk, sitting is an adventure in itself, not to mention I'm just tired and exhausted probably because my body is busy fighting what's going on inside.  So I made the difficult decision to stay behind and rest, or try to.  I was looking forward to going.
It goes to show you that with this disease, plans are always "tentative", never final (for me anyway). One day everything is going along as normal as normal can be with Crohn's, then the next, it comes back to say "hello".  Just enough to remind you that it's there.  Waiting.  Ready to pounce.  Any time.
No comments:
Email ThisBlogThis!Share to TwitterShare to FacebookShare to Pinterest
Labels: Crohns

Is Your Crohn's Talking To You?

In the peace and quiet of my bedroom, lying half asleep, I hear it.
Faint at first, but loud enough to make me wonder, what's that!?
I shrug my shoulders and close my eyes and try and go back to sleep.
Then I hear it again, a little louder this time.
My heart starts to beat a little faster wondering, what's that!?
I'm hesitant to get up and take a look around, cuz you never know, but, what's that!?
I roll over and take a look at my wife lying next to me and I wonder, should I wake her?
No, I'm the man, I can handle it.  So I slowly and quietly get out of bed and go take a look From the top of the stairs I hear it again, what's IS that!?
Even louder now, so I slowly go downstairs to have a look.
I turn on all the lights and listen.......I hear it again, even louder than ever!!
What the f*&@ is that!!??

Then realize it's just my gut talking.  Ohhhh, the life of a Crohn's sufferer.

.
No comments:
Email ThisBlogThis!Share to TwitterShare to FacebookShare to Pinterest
Labels: Crohns, Crohns and humor

If you miss HAVING an ass...
you might be a Crohnie

,
No comments:
Email ThisBlogThis!Share to TwitterShare to FacebookShare to Pinterest
Labels: Crohns, Crohns and humor, You Might Be A Crohnie
Newer Posts Older Posts Home
Subscribe to: Posts (Atom)