If you can physically SEE your abdomen "deflate" as you pass gas...
you might be a Crohnie


.
No comments:
Email ThisBlogThis!Share to TwitterShare to FacebookShare to Pinterest
Labels: Crohns, Crohns and humor

"The toughest challenges.... are given to the strongest people"

Time For Some Crohns Reflection

As I close in on my 2 years of Remicade, I'm sitting in my living room looking at my wife and two boys cuddling together on the couch and think what a lucky guy I am....and if it weren't for my Crohn's, it probably wouldn't have happened.
I turned 46 a couple of weeks ago.  Which means, I have had Crohn's more than half my life.  I have been living with this &^%$ disease for 26 years now. To this day, I still go to hospital, I just don't go as often as I used to and for less "serious" stuff.  Some would say, anytime you go to hospital it's serious, but for me staying in hospital overnight or a day or two is a far cry from the weeks or months I use to do in the beginning.
I guess I'm lucky, in one sense, that I have a mild case of the disease.  If you consider having most of your small intestine and some of your large removed, fistula's, fissure's, abscesses, infection's, severe dehydration and anemia, mild.....then yes.  From MY point of view, it's far from mild, but over the years after meeting and talking with others with Crohn's, yes, I am lucky.  It doesn't make it any easier though.
I am thankful for one thing with my Crohn's, I met my wife and have two wonderful boys.  I never thought I would ever meet anyone.  How do you explain the disease, in the beginning, to another person whom you want to date.  I told her on the first date.  You know what she said?  She said, "Okay".  That was it.  That's when I knew.
So, yes, I guess you can say I'm "happy" for the disease.....  in a way. 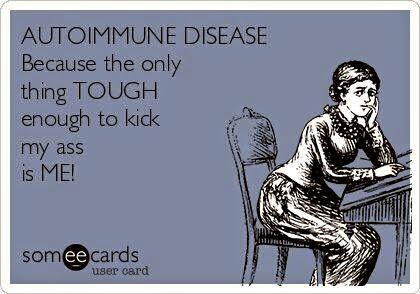 No comments:
Email ThisBlogThis!Share to TwitterShare to FacebookShare to Pinterest
Labels: Crohns, Crohns and humor

Crohnie Quote of the Day