Step Up For IBD 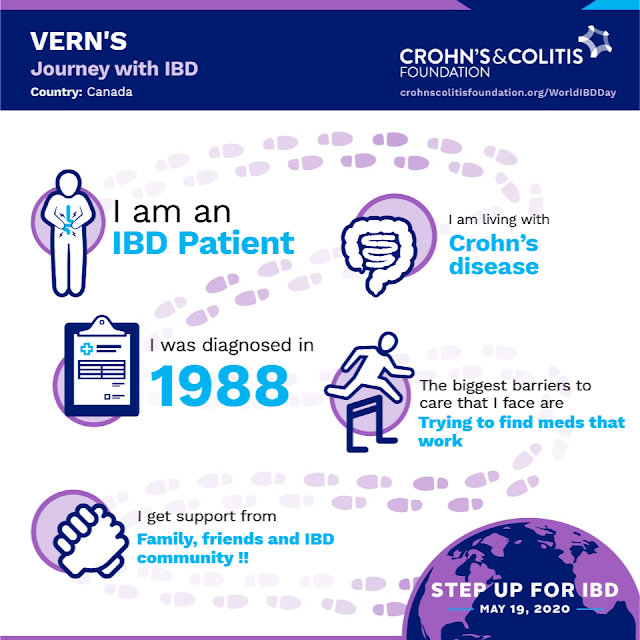 Bringing awareness to Crohn's and Colitis around the world

*picture from Crohn's and Colitis Canada


No comments:
Email ThisBlogThis!Share to TwitterShare to FacebookShare to Pinterest
Labels: Crohns, Crohns and research

If you're up all night with your mind racing with strange things like, "why do we park in driveways and drive on parkways"....
you might be a Crohnie
No comments:
Email ThisBlogThis!Share to TwitterShare to FacebookShare to Pinterest
Labels: Crohns, Crohns and humor, You Might Be A Crohnie

Humira has been an interesting adventure to say the least.
Oh, don't get me wrong, it's still doing the job, but I've had some weird "reactions" these past few injections and other IBD'ers I've talked with say it's strange as well.
So, let's back up...

I started Humira January 2 of this year without any fan fare, all good, pretty boring. Everything was pretty easy and no problems. Since then, I've had what I would call "reactions" after injecting.
Now, I don't know IF it's related to the Humira, but it's too much of a coincidence.
I do my injections every two weeks and I alternate between my left and right side of my abdomen.
Back in April, on back to back injections, I had Rigor attacks. A sudden, and I mean sudden, feeling of cold and chills, uncontrollable shaking and fever. The difference for me though, is I'll keep up with the shaking until I throw up and it slowly eases. It takes several throwing up episodes and hours later, it's gone.
What I'm left with though, is massive joint pain in my knees, hips, neck and jaw from the shaking.
It takes several days to fully recover.
My last two injections I have put in my thigh and no reaction, so I'm wondering if injecting into my abdomen is causing a reaction with my Crohn's. The throwing up makes me believe its causing a "blockage" type scenario.
I usually get Rigor attacks one a year or more before these last episodes. Now I've had two in as many months...weird to say the least. The only common factor is the Humira.
I have an appointment with my gastro soon, I'll talk with her more about it and hopefully I'm not the only one. Wouldn't be the first time.

If no one knows by looking at you, you're flaring, in pain and really have to go to the bathroom...
you might be a Crohnie

Please see this video from Jade Russell she put together featuring a wide variety of us that have a chronic and invisible disability. Supporting and bringing awareness to the large and every expanding community.

"I have a voice, I am visible"

Thanks Jade for your hard work