I've decided to put my artwork on the block.  Well, for sale anyway.  Go to my other page...

and the paintings are listed with the prices for originals and prints on stretched canvas.
If you're interested, message me and I can tell you how much it will be to ship (depending on where you live)

Thanks to everyone who already own some of my pieces.
I'm glad you like them as much as I do.
No comments:
Email ThisBlogThis!Share to TwitterShare to FacebookShare to Pinterest
Labels: crohns and art

It's All About Me (A HiStory)

I was born in a small town in British Columbia, Canada after my parents immigrated from southern England.  The first born in Canada for our family, which would eventually grow by 3 more.  My upbringing was like any other, nothing out of the ordinary.  Played soccer and music, but eventually ended up in competitive figure skating for many years and from that, coaching.
My life changed forever in 1988, when, after a bout of severe abdominal pain turned into 6 months of endless doctors visits only to discover I was living with and finally diagnosed with Crohn's Disease.  Coming as a total shock, as I rarely got sick or even went to the doctor.  I soon discovered that having Crohn's felt like I had the plague.  I lost "friends" and girlfriends because THEY couldn't "handle it", what a joke.  Even complete strangers would ask if I had AIDS because of the drastic weight loss.  I went from a healthy 175lbs to 115lbs at my worst.   I couldn't hold a job and was either in hospital, on unemployment or welfare.  I had bouts of depression and the "why me", to the point of seriously thinking of suicide......I'm glad I didn't.
Today my life has done a 360.  I'm happier, "healthier", and living with Crohn's and not letting Crohn's control me.  It's taken years of trial and error with foods, drinks and meds, but I think I'm getting closer to figuring it all out and maybe I will never discover it all, but I'll get it right.....maybe.
I met a wonderful woman who didn't care about my illness as it was part of me and that's what she was interested in.  I fell in love with her smile.  We married and now have two great boys.  I've taken everything I have inside me, everything that's happened to me and everything that I have experienced and turned that, into art.
I started painting in 2010 as part of a personal "art therapy" and I take how I'm feeling and try and convey that on canvas.  Sometimes I go months without painting and then there are times it all comes out in several pieces at once.  Music, figure skating, Crohn's and art put together to make different and interesting abstract pieces.

Crohn's chose me, I didn't choose Crohn's.  Let's see where this ride takes us.......
No comments:
Email ThisBlogThis!Share to TwitterShare to FacebookShare to Pinterest
Labels: Crohns

I found this interesting information (amongst others on crohns.net)

I've been taking probiotics off and on for a few months now and found them beneficial.  In particular, the one I take is in pill form and contains 1 billion CFU (Lactobacillus acidophilus and Bifidobacterium lactis) Advanced 4-Strain.
I did find, after some trial and error, that I get better results taking the pill about 5-10 minutes before eating.

The Imuran treatment seems to be rolling along just fine.  No problems yet, but I don't "feel" any difference than when I wasn't taking it.  Only a scope will tell I guess.
So far so good.....stay the course.
1 comment:
Email ThisBlogThis!Share to TwitterShare to FacebookShare to Pinterest
Labels: Crohns and medication

And now for something completely different.........the first painting out of the "studio" for 2012.
Different than the others, but again, it's interesting what you can come up with when you get pissed off with your original idea...and you get.........this: 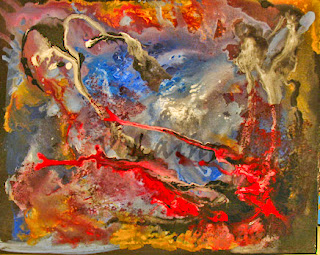 This one falls under the "what else can possibly go wrong?" category.

For months now, I have been "tolerating" neck and shoulder pain / ache and chalked it up to over doing something and have a muscle ache.  The pain eventually started showing up down my left arm and when I tried to grip things with my hand, like pumping gas, etc.  Pop a few Tylenols and Tylenol 3's occasionally and it goes away.....sort of.  (oh and by the way, Ty 3's are great for calming the intestines)
I finally relented and went to the dr to see if she can tell me what's wrong.  Turns out I have a rotator cuff "strain" which explains the shoulder, over compensating for the shoulder, which explains the ache in my neck...... AND tennis elbow, which explains the pain down my arm.  WTF!?
She figured that when I was off in October (two weeks), when I went back to work, I must have strained it somehow.  Funny, but when I started having pain in my arm I thought I was having a heart attack.  Well, my wife didn't think it was funny.

Then yesterday was my brothers bday and went to his house for pizza and cake to celebrate and so our kids can play while we chat.  Now, knowing better, I shouldn't have eaten the cake as it was an ice cream cake, but I thought, well, I'm going home afterwards, no problem.  Well was I wrong.  I spent the next 10 hours back and forth to the bathroom!  But the cake tasted good!!

The next step?  I need to find food I can eat that will make me gain weight.  It's not so easy when you are restricted on what you can eat!

This falls in to the category of "Now You Know".

I've eaten alot of things I shouldn't have, knowing it and not knowing it, and I've eaten lasagna many times over my 20+ Crohn's years, but never in my wildest dreams would I have imagined, or thought, that there would be a entree out there, that had the effect this dish did to me yesterday (and in to today).

My wife, one day, made a lasagna dish that we could put in the freezer for a later date and she made it like she normally does, with noodles, meat and cheese.  No worries, because I don't really have any Crohn's side effects from cheese.......or so I thought.

The difference this time?  My wife changed the cheese she uses inside the dish from cottage cheese, to a KILLER cheese from outer space, or Hell, however you want to put it.  The cheese she used...?

So, that was dinner time on Tuesday.  It's now 24 hours later and I have yet to go to sleep, my ass is as red as an tomato and as raw as a 3rd degree burn.  I'm STILL going to the bathroom, just not every hour.  I've never had this reaction before from eating something.  I've never had cream cheese before, as I don't like it, but thought, in a cooked dish? why not.   Well, did I learn MY lesson.