It was 30 years ago this month, in 1988, that I was diagnosed with Crohn's Disease and it's definitely been a roller coaster ride.
I've actually had Crohn's for more than 30 years because I was having symptoms long before and took many months for doctors to come up with a diagnosis.  And yes, doctors, not doctor.  Finally the last doctor was able to diagnose it because he had another patient with the same symptoms etc. It was soon after that I was in hospital for surgery to remove some of my bowel and so my life took a left turn and went in a totally different direction than I thought it would.
One surgery lead to two, then three and now I've lost count the amount of times I've been in for surgery for one thing or another related to Crohn's.  Resections, kidney stones, abscess's, fissure's, fistula's, the list keeps growing.  I tried all kinds of meds, some worked, some didn't but eventually found a good combination that kept things stable...for awhile. I've been from a healthy 170 lbs on a 5' 10" frame before Crohn's, to a low of 115 lbs at my worst.  I've had friends come and go, mainly go, but the good ones stayed. I've had too many different jobs because I couldn't work. It took everything I had to just get up in the morning, or just to "move". I've even been to that dark place in your mind where you just want to give up.
Today? Well I haven't really had any surgeries for a long time, I'm on one medication (Remicade) every 6 weeks, I'm a stable 168 lbs, I still have the good friends and made some new ones (mainly through the IBD network), I've worked for the same company for 14 years now. I have most, but not all, of my energy back and am working out.  There are still good days and bad days, but that's with anyone I think. I'm been married for 16 years to a wonderful woman who didn't seem to flinch when I told her about my condition soon after we went on our first date.  We have 2 boys now and yes, it crosses my mind all the time whether they will get Crohn's, especially when they come to me or my wife with a "tummy ache".  My mind has not looked back towards the dark.
To think, when I was diagnosed, the World Wide Web wasn't around yet.  Today, because of social media, those of us living with Crohn's or Colitis, have access to so much information, support groups and access to others with the same disease. There's lots of support, not only locally but from around the world !
There's no reason to be alone anymore.

No comments:
Email ThisBlogThis!Share to TwitterShare to FacebookShare to Pinterest
Labels: Crohns, Crohns and emotion

I wanted to give a special "Thanks!" to Benjamin Nash Design for the great logo for my blog.
He was great to work with and easy to bounce ideas off.
If you're looking for logo work I highly recommend Ben.
Thanks again for your help and the work done!
He can also be found on Instagram @benjaminnashdesign 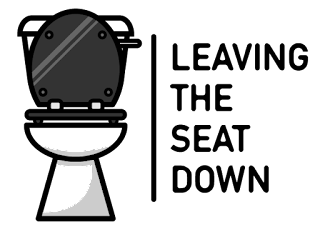 If you have tried every brand of toilet paper and can rate them by heart
...you might be a Crohnie
No comments:
Email ThisBlogThis!Share to TwitterShare to FacebookShare to Pinterest
Labels: Crohns, Crohns and humor, You Might Be A Crohnie

If you begin to recognize phone numbers written on the public toilet walls
... you might be a Crohnie

.
No comments:
Email ThisBlogThis!Share to TwitterShare to FacebookShare to Pinterest
Labels: Crohns, Crohns and humor, You Might Be A Crohnie
Newer Posts Older Posts Home
Subscribe to: Posts (Atom)