I found this great article written by Cedar Burnett, who has IBS.  For people like us, it's a must read

Thanks Cedar!!
No comments:
Email ThisBlogThis!Share to TwitterShare to FacebookShare to Pinterest
Labels: Crohns

Take a look at this:

Could this be the beginning of the end for Crohn's....?
Will Researchers prevail.....?
Will the mice break out of the lab and open a cheese factory....?

Very exciting news for Crohnies around the world!
Fingers crossed.

So, this post is a little different than most and is not Crohn's related at all.  My family lost another great lady in my Aunt, who passed away suddenly a few days ago.  As of yet, we still don't know why.
My Auntie Sue will be missed and was taken far too soon, at only 63.  I wish I could be there, but as she lives in England, I will not be able to go.  My thoughts and prayers are with my cousins and uncle.  I don't know what more to say other than she was a great lady and was there for me when I needed it whenever I visited.  She and I drove the same.....she would always "talk" to the cars in front of her telling them to hurry up, etc.

Gonna miss you.
No comments:
Email ThisBlogThis!Share to TwitterShare to FacebookShare to Pinterest

I did this one last year.  It's in my dining room and incorporates colors from my living room and dining room.  The actual size is 30" x 40" x 1.5" simply called "Home" 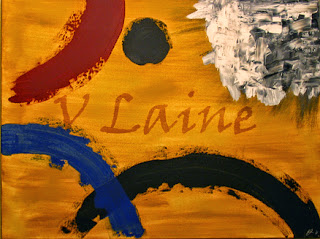 No comments:
Email ThisBlogThis!Share to TwitterShare to FacebookShare to Pinterest
Labels: crohns and art

My sons have been bugging me for months about going to the local "juicer" called Booster Juice so they can get a drink.  So this past weekend, I relented and took them to the store.  You'd think I was taking them to an all expense paid trip to Toy R Us....wow were they excited!
After explaining the hundreds of combinations, one son chose a small "Funky Monkey" which is a smoothie with Soy chocolate milk, frozen yogurt and bananas.  The other son chose a small strawberry-banana with frozen yogurt smoothie.  Well $8.40 later, yes $8.40 they ended up drinking about a quarter of each over the next few days.  Trying to explain to my two sons though, why daddy can't drink them was interesting.  Everything in that place I can't drink.  The smoothies have yogurt and the juices, well...they're juices and unless I water them down, I'll be going to the bathroom for days!  Needless to say, we won't be going back.

I had an idea though about how to explain it to them in terms they would understand.....with TV.
I put on a DVD from the Magic School Bus series and they were talking about the digestive system.  When they got to the part about the intestines, I paused it and showed them on the TV what, exactly was going on with daddy.  They showed the 'School Bus' in the intestinal tract and I explained that what they were seeing on the screen, daddy no longer had (some small and most of the large intestines).  And sometimes when daddy ate, it felt like a school bus was driving through his tummy.  "Where did it go"? was one response.  I tried to explain that daddy had to have it cut out, and showed them again my scar.  "Can't they put a new one back"?  Oh I wish was my response.  But since I explained it to them, they are a little more chatty about it especially when we eat.  "Can you eat this daddy"?  "Will this hurt you"?  "Is the school bus going through"?

I pray to God everyday they never have to go through what I have been through and am going through.
1 comment:
Email ThisBlogThis!Share to TwitterShare to FacebookShare to Pinterest
Labels: Crohns
Newer Posts Older Posts Home
Subscribe to: Posts (Atom)