First of all, what ARE "clinical trials" anyway? Again, simply put, is where people volunteer for tests to help researchers investigate new treatments for a wide variety of diseases or medical conditions.
They could be looking for how people respond to a new drug or maybe the side effects.
It also could be they are comparing existing drugs to new factors in a patients life. Clinical trials cover a wide variety of situations from new drugs or vaccines, or maybe surgical or even behavioral changes.

The World Health Organization (WHO) defines a clinical trial as:

Think of where we would be without trials. Without the volunteers. Animals, labs and computer simulations can only go so far. Nothing compares to testing with the human body itself.
Imagine diseases or conditions like, heart disease, cancer, alzheimers, parkinsons or crohns/colitis WITHOUT those clinical trials. More people are alive today, or living better lives, not only because of those scientists and researchers working hard behind the scenes to bring new treatments forward, but also those volunteering for clinical trials.

I remember back in early 2000/2001, my gastroenterologist telling me about Remicade and asking if I wanted to be part of possible clinical trials. After discussing in length about it, I declined. My Crohn's at the time was 'manageable' and to be honest, I was scared, eventhough my doctor said that from what she'd heard and read, the drug looked promising. I was worried about possible side effects, but that was 20 years ago.

In hindsight, I wish I had taken her advice and done it. I eventually made the decision to get the Remicade infusions many years later. I've now been on Remicade for over 7 years now and it's been a "god send", for me. I regret my decision 19 years ago. I could have been part of the initial study and had the benefits from it earlier.

Researchers and scientists are constantly trying to improve life for crohn's/colitis sufferers. Whether that be with improving on current treatments or coming up with new ones. Clinical trials are happening all the time. Your doctor would know of any current trials going on or coming up but also search your country's crohn's and colitis foundations. Many will have links on their websites to pre screening. You might get declined, but it just means you dont meet their criteria, don't let this discourage you. I've been declined numerous times for various reasons.

The more patients who are willing to participate in clinical trials, the better the research

If your gut talks to you so loud, it's like having another person in the room with you
.... you might be a Crohnie
No comments:
Email ThisBlogThis!Share to TwitterShare to FacebookShare to Pinterest
Labels: Crohns, Crohns and humor, You Might Be A Crohnie

If you can be through pain, fatigue, dehydration, bloating and overall "unwellness" and still look like nothing is going on
.... you might be a Crohnie
No comments:
Email ThisBlogThis!Share to TwitterShare to FacebookShare to Pinterest
Labels: Crohns, Crohns and humor, You Might Be A Crohnie

I'm honored and humbled to have been nominated for this years WEGO Health Awards and endorsements are now open.
If you have liked, enjoyed, laughed or have been informed from reading my blog, please feel free to endorse me here:

I have been nominated for Best in Show: Blog and Hilarious Patient Leader. 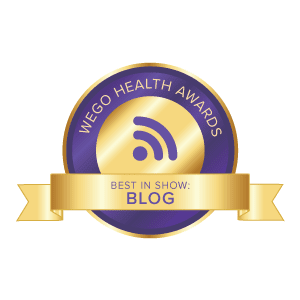 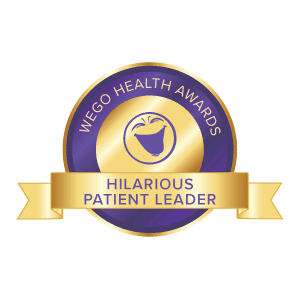 But if not me, then maybe endorse one of the other health activists/leaders listed

Thank you and good luck to all !!

If after you check in to your hotel room, you notice there are ONLY two rolls of toilet paper
... you might be a Crohnie
No comments:
Email ThisBlogThis!Share to TwitterShare to FacebookShare to Pinterest
Labels: Crohns, Crohns and humor, You Might Be A Crohnie