Further to my visit to the surgeon, last week I had my MRI appointment.  I've had MRI's before, so this was old hat to me, nothing new, nothing exciting......or so I thought.
I arrived early, as I always do, and sat in the waiting room with all the other medical imaging "hopefuls", anxiously waiting for your name to be called.  You know that feeling...when the technician comes out and everyone sits up hoping to hear your name cuz you don't want to wait anymore, either because you just want to get out of there, or simply because you don't want to wait to catch something that's floating around in the air. Because hospitals are so clean... not.
My name was called and was handed a packet of paperwork and told to follow the blue line to MRI...another waiting room, good lord.  Not so much of a wait this time, but then had to get changed into the fancy blue "smock" and comfy yellow pants and sit some more in the waiting room.
I got called into the large MRI room which actually is dwarfed by the huge MRI machine and told to lay down while they put on IV into my arm.

Then the lovely news I wasn't told about....

We're going to put in some rectal gel for contrast.  Ummmm, excuse me?  I actually had to get clarification on this because after 30 years of testing, I have never had rectal gel shoved up my ass. I had to explain to the technician that because of my anal stenosis, that might be a problem. There is no way you're getting a finger up there.  Even when I have colonoscopies, they use the pediatric scope and I'm OUT for that! He would have to contact the doctor on call to see what can be done. The doctor showed up and was going through drawers pulling out all kinds of things all the while telling me what he's gonna do....ummmm, nope.  He was getting all technical and explaining how he has this flexi tube with a balloon on the end and then inject the gel, blah, blah, blah....ummmmm...nope.  I then explained to the doctor how I basically only have the rectum left which is attached to my small intestine and if he injects that into me without me doing any colon prep (which I wasn't required to do), he's going to have a mess all over his nice MRI table.  It's funny how quickly he said....

ummmmmm, nope, no gel for you.
No comments:
Email ThisBlogThis!Share to TwitterShare to FacebookShare to Pinterest
Labels: Crohns, Crohns and humor

I am happy, humbled and surprised to announce that I am a top 5 finalist for a WEGO health activist award for this blog in the category of Best in Show: Blog.
Thanks to everyone that nominated and endorsed me.
Even if I don't win when the award is announced in October, it really does feel great just to be nominated.

Thanks to the judges and to everyone. 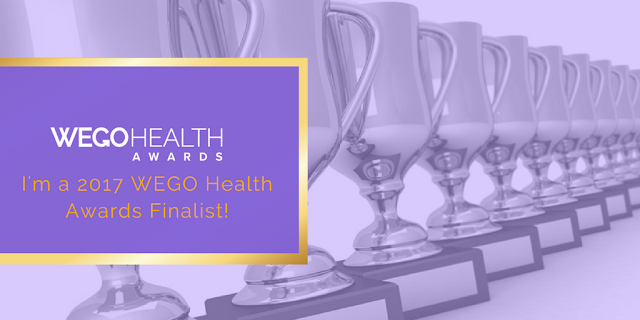 Crohnie Quote of the Day

A Visit With the Colo-Rectal Surgeon

This surgeon is one of the top surgeons around and deals mainly with cancer patients so I was hoping....

My specialist recommended me to her so all my files were transferred over.....all 30 years worth....so it was not a surprise when I walked into her office, the first thing out of her mouth was, "wow, you've had a lot going on"

After a good discussion and small exam, it was her recommendation that what is left of my large intestine, which is barely anything, be removed and have an ileostomy.  Not what I wanted to hear, but not totally unexpected.  She said I would have a better quality of life.

But before all that, I need to go for blood work (check), CT scan, MRI, sigmoidoscopy and then a laparotomy so she have have a close up look inside.  She's concerned about any "hidden" cancers.  Well, THAT made me feel better when she mentioned it!

I haven't posted in awhile because it's a lot to take in right now and even though I've had Crohn's for 30 years, I still now get that feeling like I did when I was first diagnosed.

If you need a rest....from resting
...you might be a Crohnie

No comments:
Email ThisBlogThis!Share to TwitterShare to FacebookShare to Pinterest
Labels: Crohns, Crohns and humor, You Might Be A Crohnie
Newer Posts Older Posts Home
Subscribe to: Posts (Atom)